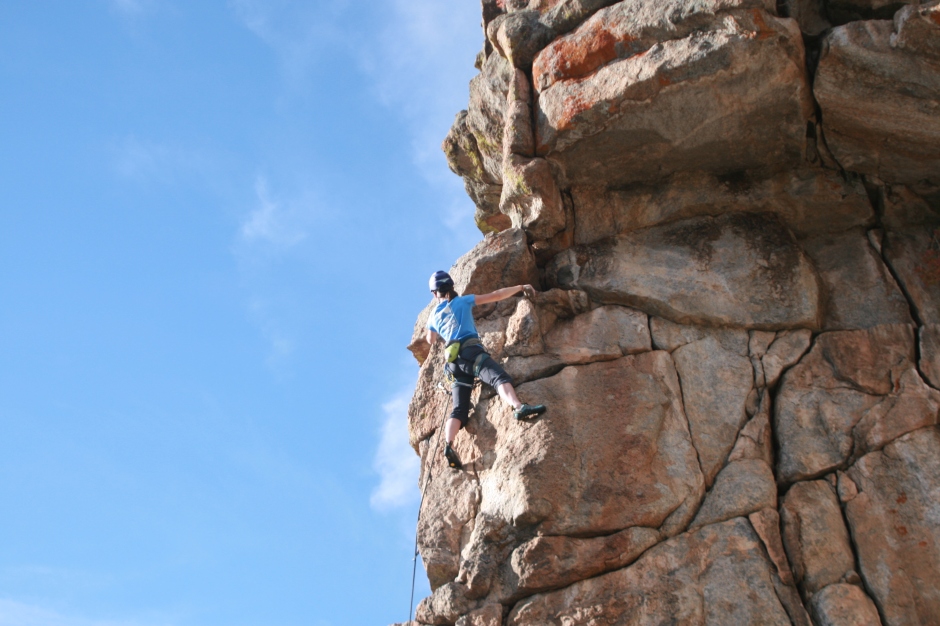 I climb, but I’m not a climber.

To me, taking on that label requires more consistency and an effort to improve in the sport. I’ve been climbing for five years and have never ascended anything harder than a 5.10 (for those unfamiliar, this grade is considered intermediate).

This is because I only really go out and climb a handful of times each year. To get better, you need to climb consistently. You need to do scary things like take big falls, get on uncomfortable routes, and, most frightening of all, interact with strangers in an attempt to find climbing partners.

But if it ever comes up that I’ve tied into a harness and scaled a rock wall, hold onto your hats. Impostor syndrome kicks in hard as I get pulled into a conversation meant for a climber, not someone who dabbles in climbing. If you casually climb, maybe you can relate.

If you climb, and it’s been announced in a public setting by either you or a friend (usually the latter), you must be good. Climbers will start asking you what grade you climb and might even list off specific routes, curious to know if you’ve done them. Non-climbers will look at you in awe and wonder how you could ever do something so frightening, not realizing that children climb the same routes as you. CHILDREN! This forces you to shut down the conversation by repeatedly stating how unimpressive you actually are at the sport.

You’re asked what gym you go to and where you climb outside.

Climbers go to climbing gyms to train for outdoor climbing routes. They work on finger strength, forearm strength and endurance. I sometimes hop on my gym’s bouldering wall, even though I’m not supposed to because I don’t pay the additional climbing fee. While I can at least list off a few outdoor areas I’ve climbed in, I haven’t been to many of the outdoor areas local to me (my climbing partner lives in a different city). So this conversation usually dies quickly.

You’re expected to have a deep understanding of climbing culture.

Yes, I know who Alex Honnold is, but at this point who doesn’t? The mention of any other professional climber is met with a blank stare. And the prospect of climbing in Yosemite doesn’t spark a sense of wanderlust and excitement. I’ve watched the climbing documentary Valley Uprising, so I can fake it through some of these conversations. But I’d be just as useless at climbing trivia as I am at regular trivia (which is VERY useless).

Climbers try to get you into different types of climbing.

If you boulder, you’ll love sport climbing. If you sport climb, you should try this multi-pitch route. If you’re into multi-pitches, you have to get into trad climbing. To borrow and slightly alter a saying from the hiking community, climb your own climb. I like ropes, I like my walls to have bolts drilled into them, and I prefer my climb to be finished at the first set of anchors. When climbers try to sell me on their preferred style, I just smile and nod.

People who have never been climbing and don’t fully understand how climbing works might envision me free-soloing to the top of a giant mountain when I say I spent the weekend climbing with friends. I’m given more credit than is due and am categorized as a fearless adrenaline junky. This is later met with confusion when I admit to being afraid of doing a certain hike because it’s high and exposed. As conversations continue I eventually get recategorized as “normal person with a fear of heights” and am suddenly much less interesting.

If you dabble in climbing and would rather not be thrust into awkward conversations, play it safe by denying your connection with the sport. Remember, only YOU can prevent social discomfort.