Today was supposed to be easy.

With my permit requiring me to spend my first night at Little Yosemite Valley, I only had five miles between the trailhead and my first night of camping. From there I planned to complete Half Dome as a day hike. But nothing is ever as easy as it seems.

I caught the YARTS bus from Fresno to Yosemite Valley without any issues and arrived in Yosemite a little after 7:30 a.m. I had to wait until 8 a.m. for anything to open, including the Wilderness Center that held my permit, a convenience store that hopefully held camp stove fuel and restrooms that held sweet relief after a four hour bus ride.

After picking up my permit I walked to a nearby store in the park to buy camp stove fuel. They only had Coleman fuel canisters. I stared at the large green cylinders for a minute before deciding it was my only option. It was a bit bulky but it was fuel. And I needed to get moving if I was going to complete Half Dome.

The woman at the register asked if I was backpacking. Alone. I confirmed her suspicions and she told me she was too afraid to do something like that. But maybe someday… She wished me luck and commented on the massive size of my pack. I forced I smile as I left, feeling like a spectacle to all the park’s day-goers.

By the time I reached the Happy Isles trailhead it was nearly 9 a.m. I wanted to hike along the Mist Trail since it was a popular hike and I wasn’t sure when I’d be in Yosemite again. The four mile hike featuring Vernal Falls climbs 4,000 feet in elevation. A good chunk of this hike is in the form of rock stairs. It would have been a challenging hike even without a 35 lb pack.

My pack gave me away as a backpacker, and everyone wanted to talk to me.

One young couple asked me about my trip, how the permit system works, if I was hiking solo (“That is so badass!”). Another man hiking with his wife gave me the same round of questions, but instead of asking if I was a solo hiker he said with a tone of urgency, “You’re meeting friends at the campsite, right?” “Oh. Yeah, definitely,” I lied.

I didn’t get to Little Yosemite Valley until close to noon. Rain clouds lingered and I felt doubtful about being able to complete my day hike up Half Dome; rain on the cables section of the hike can be deadly. Feeling exhausted, I resolved to eat something before making a final decision about Half Dome.

This is when I realized that the fuel I bought didn’t fit my camp stove.

I knew I should have checked the fit before starting the hike, but laziness and the urge to get on the trail caused, “Nah, it’s probably fine,” to win out in that portion of this choose your own adventure book.

After a brief panic and surveying fellow campers in the area, I had one offer to share fuel until I could buy my own at Tuolumne (which could only really work if we were traveling at the same pace) and was gifted a half-empty fuel canister from a pair of backpackers who were almost finished with their hike.

I debated hiking back down into the Valley to find the right fuel. It was still early and without a giant pack to weigh me down the hike would be quick.

The same hikers who gave me a half-empty fuel canister offered to give me a full (but much smaller) canister the next morning after they used it to cook breakfast. I thought that would be plenty of fuel so opted to stay put. I also decided against Half Dome, telling myself I’d get up early to hike it the following morning when the skies would (hopefully) be clear.

I sat around for a while wondering if I made the right decision about Half Dome when I was interrupted by “Excuse me, ma’am,” (always a startling phrase to hear) followed by a question about available water.

A brother-sister duo who had just hiked Half Dome was out of water and had been for a while. I offered to walk to a nearby creek with them so they could fill up using my filter. It was nice to chat with other people while sitting near a creek rather than while climbing a trail, and I felt like I was paying forward the camp stove favor I had received. Win-win.

And then… it rained.

Around 4 p.m. the hovering storm clouds finally decided to take action. It started raining. I went to the nearby pit toilets and it started pouring. Then it started thundering, lightning and… the best part… hailing.

I stood under the metal awning of the pit toilets and watched chaos ensue in the camp. Others flocked to the covered facilities and I felt great about myself for being somewhat protected rather than in the hail. I watched as massive puddles formed and quickly turned into flowing streams of rainwater.

Then I thought about my tent. Were these streams flowing toward it? Was it in a massive puddle? Suddenly I didn’t feel so great about my smelly bathroom shelter.

The rain let up a bit and I ran to my tent. The answers to the stream and puddle questions were yes and yes. Luckily my sleeping bag and sleeping pad were safe inside my pack, which was protected by a rain cover. The rain and hail picked up again and I pulled everything into my tent to wait it out. 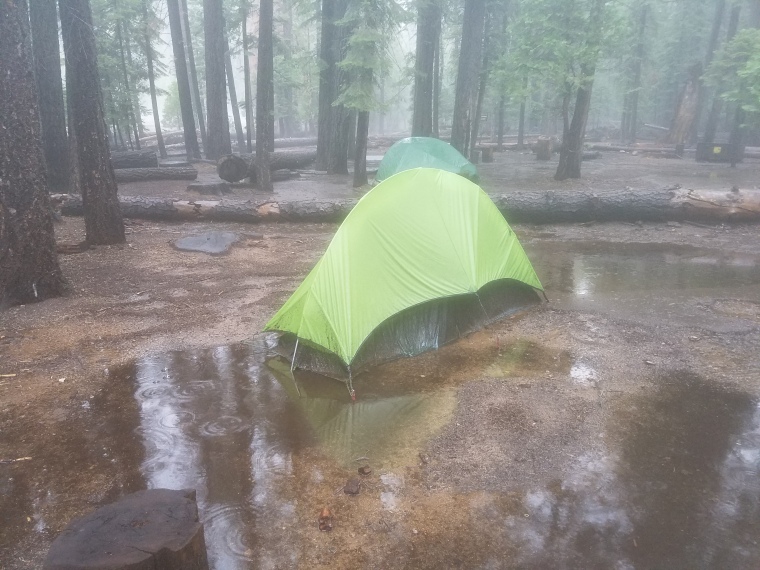 When the storm finally passed and backpackers began emerging from their tents, I felt extra lonely. People worked in teams to salvage their gear and move their tents to higher ground. I moved my tent and then stood around, dumbfounded. Huge branches fell from trees. One landed on a tent, tearing it and causing its residents to end their trip.

I stared at the branches above me, trying to judge whether or not I felt safe to camp beneath them. Then I looked at the giant puddle of a campsite that surrounded me and realized there was no other place to go. And there was nothing left to do but go to sleep.

3 thoughts on “JMT Day 1: Ask and You Shall Receive”